We have more American made Rick and Morty Pipes in stock!

Click on the pictures to enlarge. There are plenty in stock and more will be arriving by the middle of February. We also have Rick and Morty MedTainers and glass jars to store your medical dry herb in. Give those a look when you arrive. We’ll see you soon. 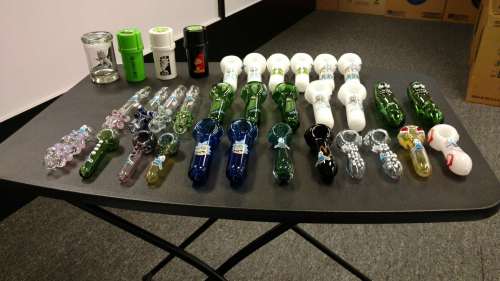 And that’s exactly what you will be getting from now on. During the holiday season, our second self-serve humidor arrived and it’s beautiful. Both of these bad boys were built by a childhood friend who is now a carpenter back in Northwest Illinois where I grew up. Trust and quality are two viable substances needed to create a powerhouse such as these two humidors.

Cigar inventory has now been doubled. For those who shopped with us at the old store many years back, we had the walk-in humidor that was built in the summer of 2002. As expected, the cost of building one now is three times as much. With these two humidors, we have about 70% of the cigars as the old store while saving 70% of the cost for a walk-in. It didn’t make much sense for me to pay all that money for nearly the same amount of cigars. The door is always open for dare I say, a third one. That would give us the full amount for a fraction of the cost.

Where have fans of cigars gone to in DeKalb County since 2002? It’s The Best In The Smoker’s World. These two humidors full of cigars will be awaiting your arrival.

We have the Smok Mag Kit for $30 cheaper than their official website! 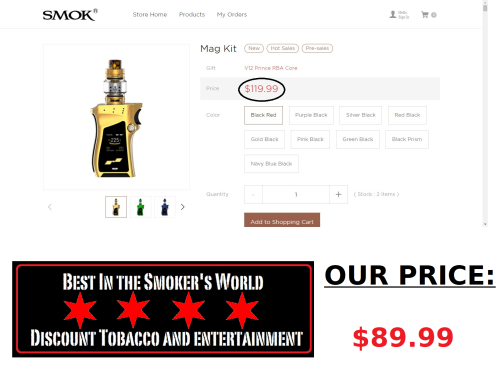 Look at the picture or go to Smok’s website to see for yourself. They have the Mag at $119.99. What’s worse? Local stores around here sell it for even more. Our price? $89.99. Nope. That’s not a typo. Need coils? We have those for much cheaper too.

I know. I know. Some may say: “Well, I can get it for cheap on another website.” Is that so? Is it an authentic Smok or a knock-off? You see, I’ve dealt with customers who have bought knock-off products online and at the local competition. Whether they were mods, batteries or coils, it’s happened. Why risk it?

When you get a vaporizer such as the Smok Mag from us, here’s what you save in no particular order: A headache, money and time (who wants to wait days/weeks for something?).

Don’t let the local competitors (who copy everything we do) or online rip you off. We aren’t #1 in DeKalb County for no reason. With all that being said, there is only one thing left to do: Come to this store now and get the Smok Mag.

Happy New Year. We’ll be closed January 1st through the 3rd for a break and re-open January 4th.

Greetings to all. My employees have put up with me for yet, another year. They’ve worked more hours than expected the last couple of months. I am rewarding them with some extra time off to spend with their families. We usually are closed on New Year’s Day, so we will also be closed the 2nd and 3rd.

It’s all good, however. We’ll be back on January 4th with normal business hours. We also have a ton of new stuff coming in when we re-open. Stay tuned for that.

For those who made orders between Friday and Sunday to be shipped: Your items will still be mailed on Tuesday, the 2nd. Tracking numbers will be emailed to you after.

Thank you very much for your support. We look forward to seeing you in 2018.