Memorial Day Sale – Your quest for tobacco and accessories begins and ends with us.

NIU Students: If you are going to smoke tobacco, smoke it with school spirit. (Custom NIU pipes and accessories) Free shipping available! 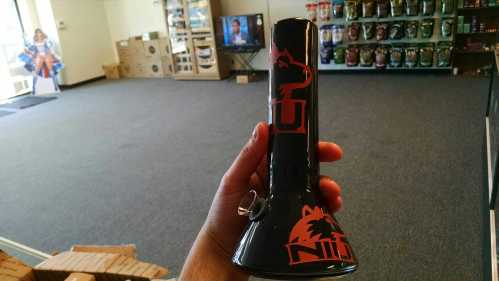 We have really outdone ourselves this time. For all of our NIU students and alumni who have shopped at our store over all of these years, I wish I had received these products sooner. We present to you custom made pipes and accessories with the NIU logo on them. We have water pipes, hand pipes, hitter boxes and grinders. These are available for a limited time only. When we sell out, they’re gone without a sure bet when more will arrive.

Ladies and gentleman, once again, these NIU custom-made products are here for a limited time only. If you are in the area, come by and see us. If you are out of town and want this shipped, give us a call at 815-991-5955. We give free standard shipping to anywhere in the United States on these products.

Best In The Smoker’s World Discount Tobacco and Entertainment is the ONLY place in the WORLD carrying custom-made NIU pipes and accessories. AND YOU CAN’T TEACH THAT. For my competition out there: I know you’re reading this. Go ahead and try to copy this because there is only ONE word to describe you. And I am going to spell it out for you: S-A-W-F-T (SAWWWWFFFT)!

Okay, someone open up the hydrant near the store. We are on fire.

A few new things have been added to our store in the last two months. Pictures are below. Click on them to enlarge.

Kratom in a bottle is back with Bali Liquid Gold 2 oz. These go for just $9.99 a bottle.

Last, but not least, Walking Dead Bic Lighters. All Bic Lighters are $1.59 and under, so stop in today to see what we have.

I cannot sign off without reminding folks who live outside of our area. We give free shipping on all Kratom and E-Liquids. Check out the E-Liquids or Kratom pages on our website to see what else we sell. Give us a call with any questions or to make an order today: 815-991-5955.

The weather is getting better outside. Time for a cigar or three. 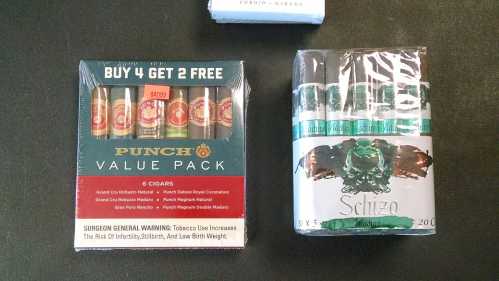 It has become routine for us over all of these years to bring in new cigars around Memorial Day. Well, with just over three weeks left until the unofficial start of summer, we’re getting a head start.

Along with our variety packs with Punch, CAO and Rocky Patel, we have continued to add new cigars to our two humidors. New to The Best In The Smoker’s World are Chillin’ Moose Cigars. It is a 6×60 natural cigar and long lasting, so I can say with confidence that this is a winner. And at just $4.99 per stick, no one can argue differently.

What’s better than one winner? How about two? That’s what we also have with Schizo Maduro. It’s a bit smaller, but it’s also a cheaper, more viable option at $3.29.

Chillin’ Moose and Schizo: The new, one-two punch to our competitors when it comes to cigars.

We have been the leader in DeKalb County when it comes to cigars for over 14 years. Come see why today!

Put some pants on. And shop at The Best In The Smoker’s World!

The 11th Commandment states that “thou shall not shop at the competition”. When customers come in and say they have fallen victim to said, competition, we do what we do best by showing them who the real champion is.

With millions watching around the world on a certain network this past Sunday, I reminded even the toughest of men who we are and what we’re about. “The Big Guy” had his doubts. He said the competition is better. Well, what happened during this match? He lost. He lost the chance to win gold. The very next day, he was no longer competing as his contract was chosen not to be renewed. This was proof of what happens when people doubt us.

Best In The Smoker’s World is still the champion of tobacco stores in DeKalb County. And that’s been the case for 14 years. As for the winner in this match, the following with all of the fans ensued: a standing ovation.

Don’t just take it from me, the King of Kings. Take it from our many fans. We guarantee the lowest price on all box mod vaporizers, e-liquids and it’s accessories. And let’s not forget our selection of glass pipes, cigars and cigarettes. All of it is cheaper than anywhere in DeKalb County.

1565 DeKalb Ave. Suite C in Sycamore is where you can find DeKalb County’s leader in tobacco and entertainment since 2002! We’ll see you here soon.